A processor of cooked meats company in Hull has boosted efficiency and slashed downtime, thanks to a newly installed compressed air system from BOGE UK.

The new system uses three compact compressors in a plant room and a new, efficient air distribution system, to replace 10 compressors that were situated around the facility. The new system also has plenty of spare capacity, while the old system frequently struggled to meet demand. 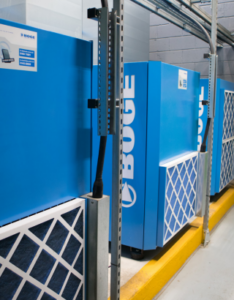 The client wanted a centralised system with high energy efficiency and plenty of standby capacity. BOGE’s solution gave the extra capacity and included a dryer, to ensure high-quality air and a better distribution system.

At the heart of the new system are three compressors. These sit in the plant room. All three new compressors have a 55kW rating: two are fixed speed, while the third, which acts as the duty compressor, is variable speed.

There is now enough capacity to run the plant on the two fixed-speed compressors with around 25 per cent headroom. This gives the company extra capacity and the opportunity to expand by up to 40 per cent in future.