The largest crisp manufacturer in the world needs a lot of compressed air to satisfy its massive consumer following.  With seven compressors of various ages, all above 110kW, and no central control, running costs were unacceptable and unsustainable even before the rise in energy prices.  Machines running offload amounted to £25k in non-productive waste.

Maziak carried out extensive data logging and identified issues with control gaps and incorrect utilisation of machines – and proposed fitting a central SAM4-8 controller.  This allowed for compressors at different ends of the factory to be controlled centrall 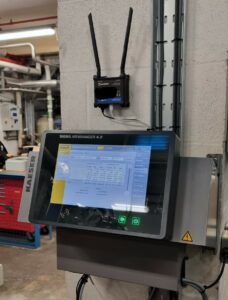 y and for each machine to talk to each other.  Due to the distance between compressor houses, this was achieved through 350m of fibre optic cable.  The customer now runs a variation of three compressors as opposed to the original seven.

New annual running costs are predicted to be a massive 45 per cent less than previously.  The customer was also able to utilise the super deduction capital allowance scheme, amounting to £21k.

The next step to deliver further energy savings is to replace some of the oldest machines (20 years old) so that the existing seven-year-old machines can become backup units for the new, even more energy-efficient models.