After a site survey carried out by Atlas Copco at a chemicals customer, it was highlighted that by replacing a bank of old, other-brand heated desiccant dryers with two Atlas Copco BD1100+ZP zero dryers, it would reduce purge parasitic losses.

The customer measures its energy usage and confirmed that, over the six months since changing to the BD+ZP zero purge desiccant dryers, it had reduced from 2.9 compressors to 2.2 compressors’ utilisation. 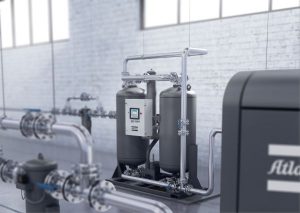 A BD+ ZP desiccant dryer offers the lowest operating costs over a 10 year period compared to heatless dryers and other blower purge dryers, as it has zero purge losses and minimal electricity usage.